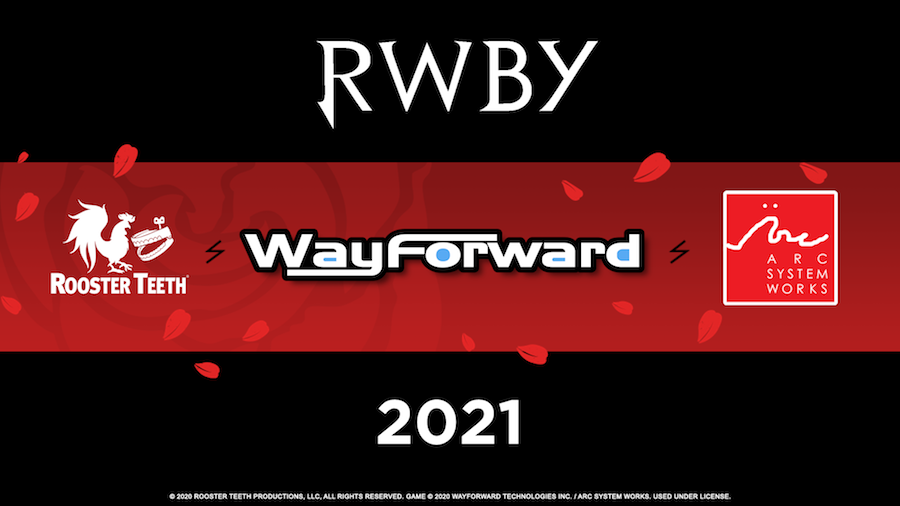 The blockbuster animated series returns for an all-new interactive adventure

In conjunction with entertainment company Rooster Teeth and publisher/developer Arc System Works, we are thrilled to confirm the production of an all-new video game based on the global animated hit RWBY. Produced by Rooster Teeth in Austin, Texas, RWBY is the first Western-style anime to be distributed in Japan.

Rooster Teeth will deliver an original RWBY story for the game from the show’s writers, Kerry Shawcross, Miles Luna, and Eddy Rivas, and provide creative oversight, while development will be handled by WayForward and publishing duties will be split between WayForward and Arc System Works. The RWBY video game (final title TBD) is tentatively scheduled to arrive on multiple platforms in 2021.

“It’s a massive honor to be trusted with a beloved brand like RWBY,” said WayForward Tyrannical Overlord Voldi Way. “Collaborating with the innovators at Rooster Teeth has been a blast, and we think the characters, personality, and style of RWBY are a great match for WayForward’s design sensibilities. We hope that fans are looking forward to seeing their favorite Huntresses in action as much as we’re looking forward to bringing the game to them.”

“To this day and date, I still cannot forget the awe when I first saw Monty’s RWBY,” added Mori Toshimichi, chief producer at Arc System Works. “At the same time, I cannot thank enough to all of Rooster Teeth for giving us the chance to have RWBY participate in Blazblue Cross Tag Battle. We are also in deep gratitude to WayForward for bringing us River City Girls. And now that we’re all in this new RWBY project, I am tremendously thrilled to the coming of this new masterpiece.”

Initially revealed during Rooster Teeth’s virtual RTX at Home event, the upcoming game will let players take control of Team RWBY — Ruby Rose, Weiss Schnee, Blake Belladonna, and Yang Xiao Long — and use their trademark weapons and abilities to deliver the stylish action that has made RWBY a sensation with audiences worldwide. Additional information about the gameplay, features, distribution, and pricing will be revealed at a later date. For more details about WayForward’s lineup of games, please visit www.wayforward.com.

“As huge fans of WayForward’s and Arc System Works’ past games, we could not be more excited,” concluded Shawcross. “Bringing a new RWBY game to life in one of our favorite genres, and with two of our favorite developers, feels like a dream scenario to us.”

About RWBY
In a world filled with horrific monsters bent on death and destruction, humanity’s hope lies with powerful Huntsmen and Huntresses. Ruby Rose, Weiss Schnee, Blake Belladonna, and Yang Xiao Long are four such Huntresses in training whose journeys will take them far past the grounds of their school, Beacon Academy. Though each may be powerful on their own, these four girls must overcome dark forces and work as a team if they truly hope to become the next generation of Remnant’s protectors.

About Rooster Teeth
Rooster Teeth is a fan-driven, community-built entertainment company. From humble origins in a spare bedroom, Rooster Teeth created the web series Red vs. Blue, an innovative form of entertainment for a changing media landscape that sparked the growth of a passionate global fandom. From that foundation, Rooster Teeth pioneered a direct-to-consumer lifestyle brand for its growing online following with subscriptions, advertising, e-commerce, and live events. Rooster Teeth produces several original content series including RWBY, the most popular western-style anime series today, The Rooster Teeth Podcast, and daily video series featuring an in-house cast of influential talent. With broadcast and live-action production capabilities and a world class animation studio, Rooster Teeth engages industry-leading networks, streaming entertainment services and creative talent to develop projects that reach global audiences through its Studios division. Rooster Teeth cultivates the gaming lifestyle it helped define with partnerships through its industry-leading video-first podcast network, The Roost. Rooster Teeth has a massive global footprint of more than 45 million subscribers to its YouTube Network, 5 million unique weekly viewers across its RoosterTeeth.com hub and more than 4 million registered community members. The company was founded in 2003, and is a subsidiary of Otter Media, a WarnerMedia company. Discover more at RoosterTeeth.com.

About Arc System Works
Arc System Works is a developer and fighting game specialist from Japan – best known for the Guilty Gear series of games and, more recently, the BlazBlue series – that has garnered international critical acclaim for its innovative fighting system and spectacular 2D artwork. For more information, please visit the official website at www.arcsystemworks.com