Time for some Leg Work!

ATTENTION! This update contains important info regarding PLEDGE PAYMENTS and REWARD LOCK DOWN ON AUG 17th! 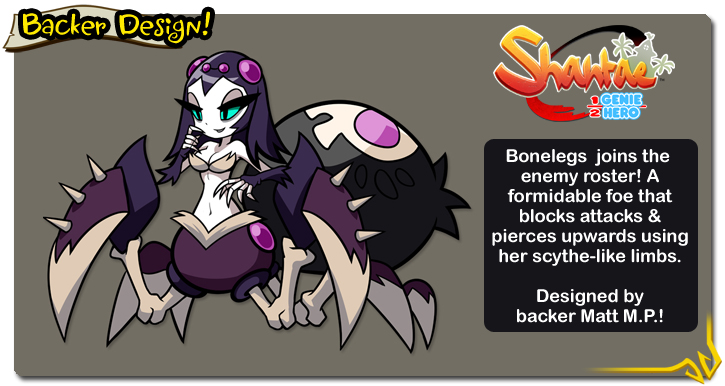 We’ve got a brand new enemy to show off today, Bonelegs, the 2nd backer-created enemy by Matt M.P. Matt’s idea was to have a large arachnid that could respond to direct attacks, and strike upwards at players who attempt to leap out of range. The design began with some very icky and more traditional giant spider shapes, and then evolved into something like a were-spider. We worked with Matt to make sure that this spider would complement Shantae’s Spider Form (which is still a work in progress). When players encounter this creature in-game, the powerful front legs will mash together to form a shield, which players will need to work around if they hope to strike at its weak spots. The arms will also be able to pierce upwards to catch overhead heroes unawares. Don’t take this enemy lightly! We’d like to extend a huge thank you to Matt P. for bringing his vision to Half-Genie Hero!