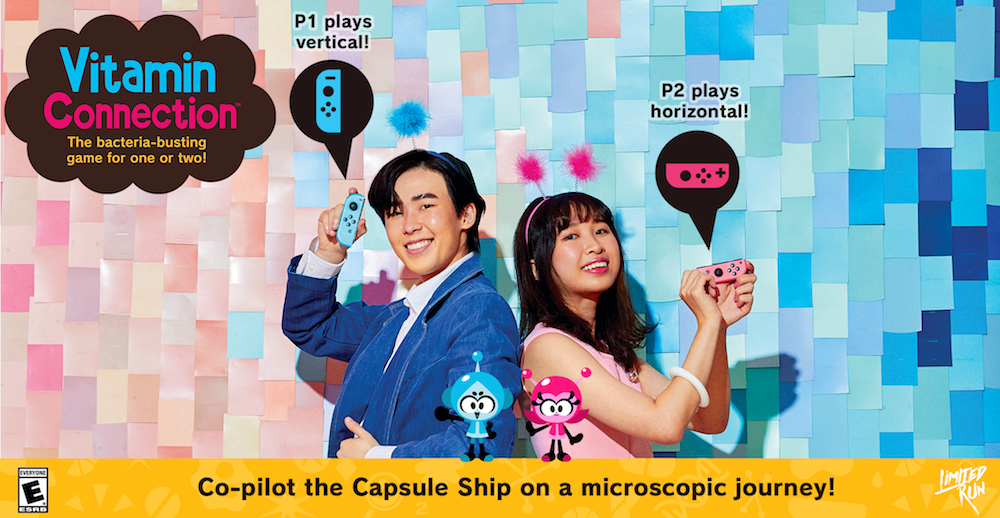 Everything you need to know about piloting your Capsule Ship

Vitamin Connection, the Switch-exclusive “cure-’em-up” action game for one or two players, is available now in the Nintendo eShop, bringing with it all kinds of crazy antics and quirky situations. As the dynamic duo of Vita-Boy and Mina-Girl, you’ll get microscopic as you blast bacteria monsters with your Vitamin Beam, dodge dangerous debris, move obstructions with your Claw Module, engage in rhythmic dance-offs, and more! You’ll even rescue a dog that’s fallen ill from eating chocolate — from within!

So are you ready to take command of the Capsule Ship and put a stop to the microbial menace that’s threatening the Sable family? Vitamin Connection’s controls are built from the ground up specifically for Nintendo Switch and are often as unique as the gameplay itself, so here’s what you should know when you embark on your inner-body journey. There are two distinct modes of play in Vitamin Connection, each with different controls: Solo Play and Together Play. In Solo Play mode, a single player can use both Joy-Con controllers (we recommend attaching them to the Joy-Con grip or playing in handheld mode), a Nintendo Switch Pro Controller, or even a Switch Lite to manage all functions of the ship; in Together Play mode, two players team up — one using the left Joy-Con (held vertically), and the other using the right Joy-Con (held horizontally) — to share piloting duties. That’s three different ways to experience the game!

In Solo Play mode, you move the Capsule Ship with the left analog stick, and rotate the ship by pressing L or R (or ZL or ZR for faster rotation) – critical for avoiding obstacles, getting the Capsule Ship through twisting passageways, and matching colors to cut through bacteria ribbons! In addition, by pressing the right analog stick in any direction you’ll unleash your Vitamin Beam against foes, plus you can speed up your movement through the stage by holding down any of the controller’s face buttons. Things start to get a bit more complex when you acquire the ship’s Claw Module; to use it, press down the right analog stick to activate it, then aim with the left stick and hold the right analog stick to grab onto something before moving it out of the way. Alternatively, you can hold any direction on the Control Pad, then use motion controls to move the position of the claw! Note that you can’t move the ship while using the claw, so be cautious when using this tool; don’t worry if you need to try a bit before you’ve mastered it!

Though many of the Sub-Games use the same control setup for movement and rotation, sometimes the interface adds new wrinkles. For example, in the Dance Festival Sub-Game, you’ll need to clap to certain beats by pressing a face button, and in the Grab Fever Sub-Game, the Capsule Ship switches to Hand Form and gains an arm attachment, which you extend by pressing up on the right analog stick — just don’t hit any of the enemies by accident! On the co-op side of things, in Together Play mode, player one uses the joystick to move the Capsule Ship and presses the ZL Button to fire the Vitamin Beam while holding the left Joy-Con in a vertical orientation. Meanwhile, player two holds their Joy-Con horizontally and actually rotates the controller like a steering wheel to rotate the ship (resulting in some satisfying HD Rumble effects!) while also using the analog stick to aim the Vitamin Beam. (Note that if player two’s Joy-Con rotation stops matching the on-screen action, you can recalibrate by holding any face button, then rotating the Joy-Con so it matches the position of the ship, then releasing the button.) As you might expect, coordination and communication between players is essential for a successful journey! Using the Claw Module is a cooperative experience as well. Player one readies the tool by pressing any face button on the left Joy-Con, then positions the claw by pointing with their controller. Player two can then open and close the claw to grab things using their analog stick, allowing player one to move objects or enemies out of the way.

Like in Solo Play, the controls can be especially interesting during Together Play’s Sub-Games, the most innovative of which might be Grab Fever. When playing this Sub-Game cooperatively, player one moves the ship side to side, while player two extends the Capsule Ship’s arm using a function exclusive to the Nintendo Switch Joy-Con — the IR Motion Camera! To extend the arm, player two places their hand over the IR sensor on the end of the Joy-Con, and the ship’s arm will extend or contract depending on how far away you position your real-life hand from the sensor! It takes some practice, but mastering this action is especially satisfying, particularly in the more advanced stages. No matter which way you play — Solo or Together, player one or player two — Vitamin Connection promises a colorful, creative, action-packed experience featuring crazy scenarios and equally crazy challenges, as well as Switch innovations like HD Rumble, motion control, and the IR Motion Camera. Can you save the Sable family…and maybe even the entire world? Only by forming a connection with the unique controls (and, of course, your partner in co-op mode!) will Vita-Boy and Mina-Girl be able to succeed. Good luck out there!