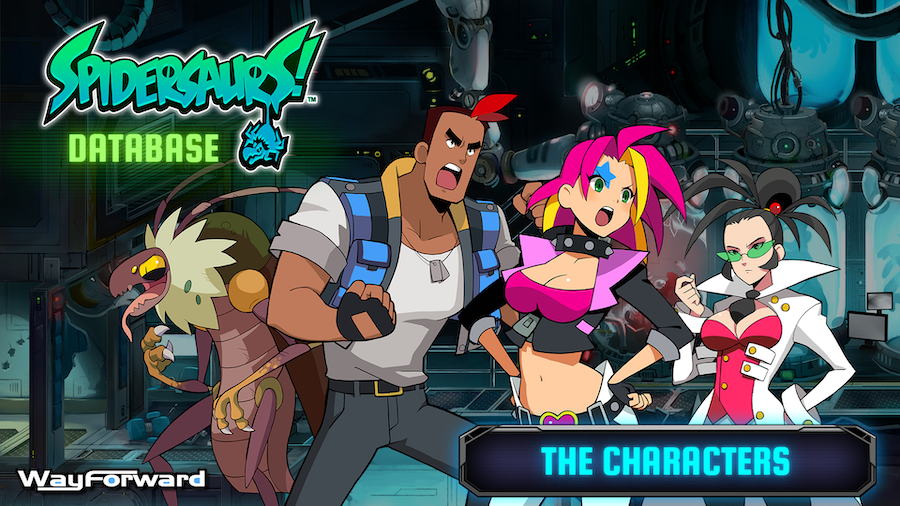 Meet the heroes and other key personalities of this cartoon-inspired run-‘n’-gun action game!

Lab-created spiders, filled with dino-might…! Originally engineered by InGest Corp as a solution to world hunger, the half-dinosaur, half-spider mutant monstrosities known as Spidersaurs are on the loose, and only you (and a friend in co-op mode) can stop them! Leading the charge are InGest’s elite taste-testing interns, up-and-coming punk rocker Victoria and police-officer-in-training Adrian, who are unleashing their uniquely specialized arsenals to prevent the Spidersaurs from breaking out of the InGest facility and into the wild! In this article, you’ll learn more about the heroic duo, as well as the InGest support staff and other key characters in this action-packed, Saturday-morning-cartoon-inspired run-‘n’-gun shooter, which is available to preorder in physical form on Nintendo Switch, PlayStation 4, and PlayStation 5 in both standard and collector’s editions until Feb. 5, 2023! Dependable, athletic, and resourceful, Adrian is one of the playable characters in Spidersaurs. This by-the-book individual is currently training for a career in law enforcement, but in the meantime, he’s making ends meet through various odd jobs, including delivering pizzas and testing InGest’s latest food products. His weapon of choice is the Sport Caster, a heavily customized potato gun that has been modified to turn surplus sports equipment into devastating anti-Spidersaur armament. He’s willing to risk it all to stop the Spidersaur threat!

Fun Fact: An early idea for Spidersaurs was that one of the heroes would have a million jobs to make ends meet. Since Adrian is the straight-laced rule-follower of the two, it seemed natural for him to assume needing more money = getting more jobs. Director Tomm Hulett states this is how he is in everyday life, and once had four jobs at once in order to make his car payments, so he tapped into this mentality when writing Adrian! Sure, saving the world is great and all, but what Victoria really cares about is her music career! A bit of a loose cannon, she joined InGest’s food-testing program as a quick ‘n’ easy way to help earn cash for her band. Now that the man-eating monsters have broken free from their confines, Victoria’s  discovered that her talent for shredding on stage translates well into tearing apart Spidersaurs with her weaponized guitar, the Thrashburn Perilaxe. One way or another, Victoria is planning to climb to the top of the entertainment mountain, and no eight-legged freaks are gonna stop her!

Fun Fact: In contrast to Adrian, Victoria is scrappy and uses whatever is available to her advantage; she’ll wheel and deal to get every last dime! Director Tomm Hulett says he’s more like Victoria when it comes to game development, in which he sometimes has to make the best of a surprise situation, so he channeled this aspect of himself when writing for Victoria! Dr. Aracha Sorez is InGest Corp’s lead researcher and CEO, as well as the scientific genius behind the Spidersaurs. Not one to suffer fools lightly, this bioengineering billionaire risks losing it all if her creations escape the InGest facility. She developed the Spidersaurs to solve humanity’s hunger crisis, but unfortunately they seem to have other ideas!

Fun Fact: There is a HIDDEN MEANING in Dr. Sorez’s name!

That’s right, “Dr.” is an abbreviation for “Doctor”! Aracha achieved her doctorate in record time, which is a good thing! Without her novel solution to world hunger, humanity would be in big trouble! An InGest chef, Paulette D’nosh offers advice and support to Adrian and Victoria as they battle the Spidersaurs – from a safe distance, of course. She has a wealth of information about Spidersaur behaviors as well as the InGest facility, but her biggest concern is about how the Spidersaurs taste!

Fun Fact: The idea behind Paulette is an assistant character who is very soft-spoken in person, but communicates with you very aggressively during gameplay via loud speakers throughout the facility. She tries to hide how passionate she is about Spidersaurs, but sometimes it just spills out! It is good to love what you do. Uwe Richter is both scientist and chef, making him a key InGest team member. He not only helps bring Dr. Sorez’s Spidersaur designs to life, but makes sure they’re delicious and nutritious too! Unlike some of his colleagues, he does have some ethical concerns about his work, however, which seems to leave him in a perpetual state of panic.

The major financial backer of InGest Corp, Stockton Vester is in many ways responsible for the creation of the Spidersaurs. He doesn’t sweat the details, nor is he especially concerned with the scientific side of things – he leaves all that to Dr. Sorez and her crew – but he’s more than happy to share his fortune so he has cool new tech to play with. He’s like a kid in a (man-eating) candy store!

Fun Fact: Stockton has a lot of money. He has probably funded a lot of other ventures that don’t feature enormous dinosaur/spider hybrids, but are no less ill-advised. Just what the heck is The Roach!? He’s not a Spidersaur, and he’s certainly not human! So where did he come from, and how did he learn to copy Adrian and Victoria’s moves!? Or to talk, for that matter!? Whatever he is, he’s a fierce foe that keeps popping up, no matter how many times you try to squash him.

Fun Fact: Did you know you can date The Roach? Well…not really, but in an alternate timeline where WayForward actually created the April Fools 2021 joke game “Are We Soulmates or am I Just Being WayForward” you totally could!