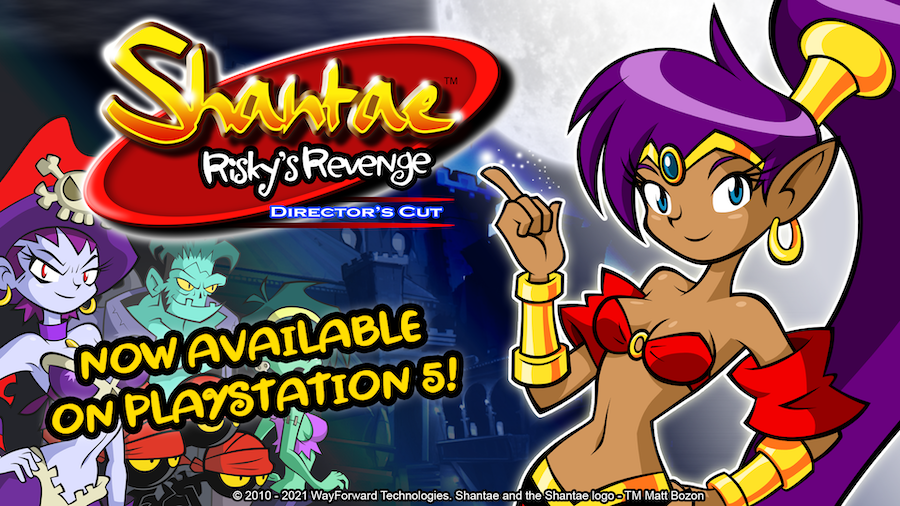 It’s time for revenge in this classic Shantae sequel!

The time for vengeance is nigh! We are excited to announce that the digital version of Shantae: Risky’s Revenge – Director’s Cut is now available natively on PlayStation 5. Packed with hair-whipping action, magical belly-dance transformations, and a nonlinear world overflowing with gorgeous 2D animation, the game is priced at $9.99 and is rated E10+ by the ESRB.

An enhanced version of the second chapter in the hit Shantae series, Shantae: Risky’s Revenge – Director’s Cut once again puts players in control of Shantae, the Half-Genie heroine, who’s on a mission to stop Risky Boots, the self-proclaimed Queen of the Seven Seas. To complete her quest, Shantae will journey from one end of Sequin Land to the other while gaining numerous abilities, encountering outlandish NPCs, defeating challenging enemies, brewing zombie coffee, rescuing a puppy, and more! But will that be enough to overcome her arch-enemy’s vengeful scheme?! You can get the game here and check out the trailer here!

Shantae: Risky’s Revenge first launched on DSiWare in 2010, at which time it was awarded IGN’s Best DS Game of the Year and was the year’s highest-rated handheld game on Metacritic. A Director’s Cut on various platforms followed, offering upgrades such as improved navigation capabilities, HD character portraits, and an unlockable Magic Mode. The PlayStation 5 version also adds new Dual Sense features and Activity functionality, and owners of the existing PlayStation 4 digital version of the game will be able to upgrade to the PS5 version at no extra charge.

The launch of Shantae: Risky’s Revenge – Director’s Cut on PlayStation 5 marks the first of several WayForward titles that will be receiving native PlayStation 5 versions. Games scheduled to follow in the months ahead include River City Girls, Shantae and the Pirate’s Curse, Shantae: Half-Genie Hero Ultimate Edition, and Shantae and the Seven Sirens. For more information about Shantae: Risky’s Revenge – Director’s Cut, please check out the game’s site, and for news on other WayForward releases, please visit the rest of www.wayforward.com.