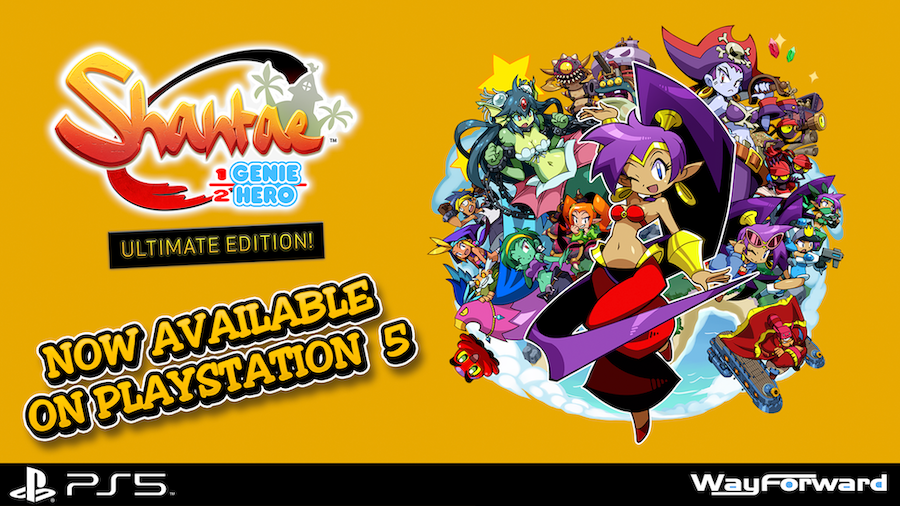 Half genie. Half human. All hero! We are pleased to announce that the digital version of Shantae: Half-Genie Hero Ultimate Edition is now available natively on PlayStation 5! The ultimate version of Shantae’s first HD adventure, this crowdfunded crowd-pleaser is bursting at the seams with modes, transformations, and silky-smooth platforming action. The game is available as a PS5 purchase for $29.99, or as a free upgrade for those who already own the game digitally on PlayStation 4, and is rated T by the ESRB. You can get the game here and check out a trailer here!

Initially brought to life through a successful Kickstarter campaign in 2013, then released on multiple platforms in 2016, Shantae: Half-Genie Hero is the fourth installment in the Shantae series. As Shantae, players utilize hair-whip attacks, a variety of spells, and dance-based animal forms to traverse various regions of Sequin Land and defend it against a rogue’s gallery of villains, including the explosive Ammo Baron, the terrifying Hypno Baron, and Shantae’s nemesis, the scourge of the Seven Seas, lady pirate Risky Boots!

As with previous releases of the Ultimate Edition, the game comes complete with an assortment of bonuses, including alternate outfit colors (Shantae’s blue costume, Risky’s black costume, and Shantae’s blue swimsuit) and Shantae’s Tinkerbat transformation. The PS5 version also adds system-specific features such as DualSense support and Activity functionality.

Hot on the heels of Shantae: Risky’s Revenge – Director’s Cut, Shantae: Half-Genie Hero Ultimate Edition is the second of several WayForward titles making the jump to PlayStation 5. Games scheduled to follow in the months ahead include the original Shantae, Shantae and the Pirate’s Curse, Shantae and the Seven Sirens, and River City Girls. For more information on Shantae: Half-Genie Hero Ultimate Edition or other WayForward releases, please visit the rest of wayforward.com, or follow @WayForward on Twitter or Facebook.