Shantae and the Seven Sirens Now Available on PlayStation 5

March 22nd, 2022 · Chris Hoffman · Comments Off on Shantae and the Seven Sirens Now Available on PlayStation 5 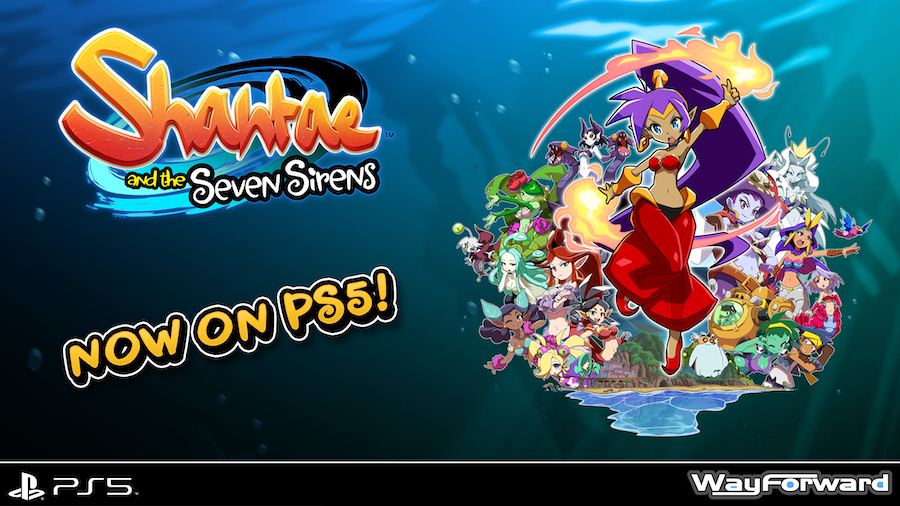 There’s trouble in paradise once more! That’s right: Shantae and the Seven Sirens, the latest and largest title in the Shantae action-adventure series, is now available to download natively on PlayStation 5. Packed with hair-whipping action, hip-shaking dances, magical transformations, cartoon-quality cutscenes, and a charming cast of characters, Shantae and the Seven Sirens is rated T by the ESRB and is priced at $29.99 as a PS5 purchase or is available as a free upgrade for owners of the PlayStation 4 version. You can get the game here and check out the launch trailer here!

Originally released on consoles and PC in May 2020 and on Apple Arcade in September 2019, Shantae and the Seven Sirens will take you to the tropical resort of Paradise Island, where — following a gorgeous anime-style opening by the renowned Studio TRIGGER — you’ll encounter new Half-Genie friends, as well as myriad mysteries beneath the waves. As Shantae attempts to uncover the island’s secrets, she learns new Fusion Magic animal transformations and powerful environment-affecting dances, acquires a variety of upgrades, spells, and collectibles (such as ability-boosting Monster Cards), explores multiple towns and labyrinths, and fights an array of foes — including her nemesis, the nefarious lady pirate Risky Boots, and the diabolical Seven Sirens!

The PlayStation 5 edition comes complete with all the modes and content that were introduced in the game’s “Spectacular Superstar” update, providing five ways to experience the adventure: Definitive Mode (a “director’s cut” version of the game), Full Deck Mode (start with all 50 Monster Cards), Rule Breaker Mode (equip up to 50 Monster Cards at once), Beginner Mode (an easy mode makes for newcomers), and Legacy Mode (the game as it was initially released). The PS5 version also adds system-specific features, including DualSense audio and Activity functionality.

Described as “an incredibly entertaining platform-adventure” by Hardcore Gamer, Shantae and the Seven Sirens follows Shantae: Risky’s Revenge – Director’s Cut, Shantae: Half-Genie Hero Ultimate Edition, and River City Girls as the fourth of several WayForward legacy titles making the jump to PlayStation 5. And don’t worry: The remaining games in the Shantae series (the original Shantae and Shantae and the Pirate’s Curse) are expected to arrive on PS5 in the months ahead. Additionally, if you prefer physical media, a disc-based version of Shantae and the Seven Sirens for PS5 is planned for release from Limited Run Games.