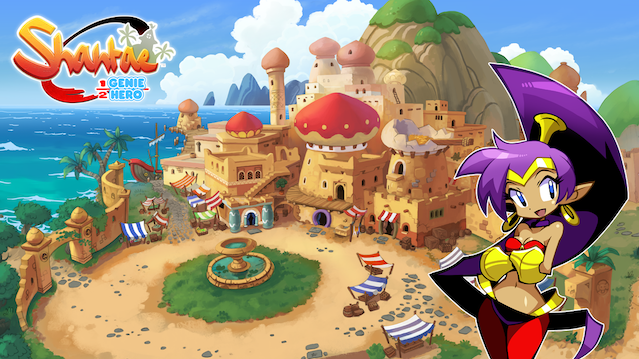 Today is the day! Shantae: Half-Genie Hero, the game to which you have GRANTED LIFE ITSELF is now LIVE all over the world!! It’s SO AWESOME to see so many people enjoying the game that we made together! Reviews are rolling in, fans are going nuts… people are having a great time with Shantae’s newest outing!

Remember, if you get a chance – please take a moment today and throughout the week to post or retweet videos, fan art, reviews… or make use of the Fan Kit. Anything you can do to help promote the game is greatly appreciated!

December 20th 2016 is Shantae: Half-Genie Hero’s launch day! It’s hard to believe that we’re finally there! Yes!! This is really happening!!! So… we’re just going to keep on saying it – THANK YOU for funding this project so we could bring it to life. We made this game together, and it’s time to present our hard work to the entire world!

Let’s make LAUNCH DAY a huge success! You can help by making some noise! All of the money you’ve pledged went into game development, not into advertising. So we’re asking every Backer to contribute one more time – not with your wallets, but with your VOICE! Post, retweet, “like” a cool YouTube video, create or support a Twitch stream, or like/link your favorite Half-Genie Hero reviews! Let’s show the world what 22,000 Shantae fans can do!

…OR, if you’re feeling really creative, you can use our brand new Fan Kit (http://bit.ly/2i8JpaB) which includes the newest promotional images, screenshots, and backgrounds.

Wow, the last two weeks were intense! Backer Code distribution was successful overall, with most Backers receiving codes several days prior to launch. However, there were plenty of cases that needed to be worked out via support email.

At this time, there are still people in our support queue. If you’re one of them, we’re dealing with every Backer on a case-by-case basis. It will take some time, but we will get to you as quickly as humanly possible. If you’re a Backer, and have followed the steps listed in UPDATE #94, you’re on our list! If not, please follow those steps to ensure that our support team is aware of the problem!

A message for Wii U (EU) Backers

Due to circumstances that are beyond our control, we are still missing 800 Wii U (EU) Backer Codes. We are working hard to get the matter resolved. However, we are concerned that the codes will not arrive before the holidays. We will be on standby throughout the holiday. If the codes arrive we will distribute them the moment they come in. Please be aware that this may not be fixed until after the holiday.

Each of you has been sent a complimentary Steam Code for Windows PC so that you can play the game. These codes, which were sent out via Backerkit, are yours to keep. We know this doesn’t solve the problem for many of you. Please accept our sincere apology. The moment Wii U (EU) codes arrive, we’ll send them.

A Final Thank You!

You’ve all been incredibly patient. It took longer than expected, but we’re very proud of what we’ve all accomplished together. With launch arriving tomorrow, we want to extend our gratitude one more time. You really made this project what it is. Thank you!

We have another update for you regarding Wii U Backer Codes. We’ve been sending a lot of Updates lately, so we’ll keep this short and to the point!

Codes for Wii U North America have gone out! Hooray! You should all see an email from Backerkit! If you’re having trouble finding your code, please see Update #94 for further instructions!

Wii U Europe Codes are still on the way!

At this time, the only Backer Codes we’re still waiting for are Wii U (EU). We still expect these to arrive at any moment, but in the interest of serving you best, we’re going to issue each Wii U (EU) Backer a complimentary Steam code to help tide you over.

Look for an email from Backerkit, and enjoy this complimentary code while you wait! You are the last group to be served, so thank you for your patience. As soon as we get the Wii U (EU) Codes, we’ll send them out right away!

Please note: this DOES include Backers who’ve selected Wii U for Australia and New Zealand.

Next Up, Press Codes

A quick heads up! Now that the majority of Backers have been served, we’re working on the next step, which is to send out Press Codes. This needs to happen this week in order to get reviewers time with the game prior to Launch Day.

Don’t worry — Support emails from Backers are still our highest priority! We’ve been working our way through the support list with much success, and if we haven’t gotten to you, we will soon!

Remember, if you’re missing your Backer Code for any reason, see Update #94 for instructions on how to get into our support system!

Thanks! See you next update!

Howdy Backers! This week is all about getting your Backer Codes to you! We already sent the bulk of them out on Friday to get the ball rolling and it looks like most of you have received them. If you haven’t already, now’s the time to locate that email, click the link, and get your Backer Code!

The following codes have been sent out:

Also note that any codes that were time-stamped are now active!

Wii U codes for both North America and EU have not arrived yet. We will send them to you the moment they arrive! We expect them sometime this week.

HELP! I Can’t Find My Code!

If you have not received your code, or can’t find it, we’re here to help! Here are the steps you need to take:

Thanks, everyone, for your patience while we distribute codes!

This is it – the moment you’ve all been waiting for! The digital version of Shantae: Half-Genie Hero now has an official release date of December 20!

Page 9 of 15 First Previous...7891011...Next Last
We use cookies to ensure that we give you the best experience on our website. If you continue to use this site we will assume that you are happy with it.OkPrivacy policy