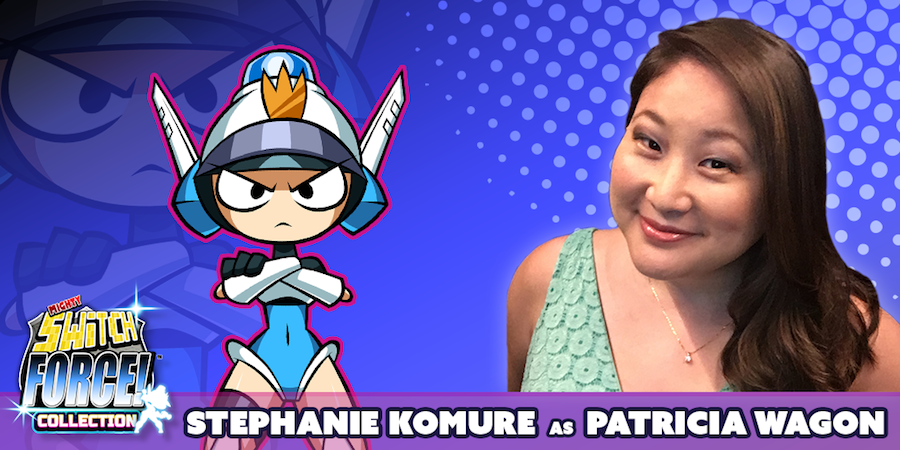 If you’ve been playing the recently released Mighty Switch Force! Collection on Nintendo Switch, PlayStation 4, Xbox One, or PC, you’re no doubt familiar with Officer Patricia Wagon yelling “Justice served!” and “Gotcha!” as she catches bad guys and engages in four games’ worth of puzzle-platforming action. The person responsible for verbalizing Officer Wagon’s trademark catchphrases is voice actress (and voice director) Stephanie Komure (@StephanieKomure on Twitter), who has been bringing the cybernetic peacekeeper to life since the series debuted in 2011. We recently caught up with Stephanie to talk about the Mighty Switch Force! games, her role as Officer Wagon, her experience as a voice actress, and more.

WayForward: First, tell us a bit about yourself. How did you get into voice acting, and what other notable roles have you performed?

Stephanie Komure: Hi! My name is Stephanie Komure, and I am so lucky to be the voice of Patricia Wagon in the Mighty Switch Force! series from WayForward! Some of my other favorite roles have been Emilia Percival in Phantasy Star Portable 2 (my very first video game role!), Phosphora in Super Smash Bros. for Wii U/3DS and Ultimate, multiple roles in Fallout 4, Fallout 76, and Rage 2 (I love Bethesda because there’s so much emotion and raw acting required for these challenging roles), and I also recorded Ahmanet, the big bad in WayForward’s The Mummy Demastered! Most recently, I’m the voice of Leo in the fabulous mobile game, Epic Seven, aaaand I can’t say what roles, but I’m SO excited to be a part of the upcoming and highly anticipated Psychonauts 2!

As for how I got into voice acting, it’s a fun story! My first job out of college was as a graphic designer at a boutique video game publisher called Working Designs. This was my dream job, because the Lunar: Silver Star Story series was my absolute favorite, and the company was all about premium game packaging (before premium game packaging was a thing in the U.S.), which was everything to me as a fan and graphic designer! Working Designs was one of the first American localization companies to hire actors and include full English language dialogue in their JRPG titles at a time when voice acting was not common in games. With so much innovation, obviously the company garnered quite a niche fan following, so it was no surprise that we would often get voice sample recordings mailed to us from fans who wanted to be in our games. For some reason, those samples always found their way onto my desk, so I would listen to them while working on logos or banners for E3. Again, these were just fan recordings, mostly acting out scenes from Lunar or their favorite anime series, but it planted a seed in my head and I wondered what it took to become a legitimate voice actor. Years later, when I had relocated to the San Francisco Bay Area and was working for other prominent game companies, I did research and found whole schools dedicated to the voice acting craft. So, I basically gave myself a second education, studied acting and voiceover, and eventually made the move to Los Angeles to pursue voice acting full-time. And the rest, as they say, is…bygone days of yore! (Totally used a thesaurus for that. Very proud moment.)

WF: How were you introduced to WayForward and the role of Officer Wagon?

SK: Oh! I love this story, too! I’m not the best at networking (and these days I just have no time for it, which is unfortunate), but this was a case of networking done right combined with a genuine interest in WayForward’s games and a whole lot of luck! Now, I can’t remember exact details, but I saw an audition posting for a voice in a game, and I think I may have missed the deadline to audition or something, so I resorted to the unconventional, and totally Google stalked the amazing Adam Tierney at WayForward…and subsequently apologized to said amazing Adam at WayForward for Google stalking him, who then said he appreciated my initiative, and allowed me to audition for the role! The audition in question was for Centipede: Infestation from 2011. I didn’t book that role, but it looked so awesome that I actively sought the game out at E3 that year, and emailed Adam to tell him that I loved that they did a wonderful job of creating a modernized version of the classic Atari gameplay. At that point, he told me they were working on an action-puzzle game on the 3DS and that they didn’t have a big budget for VO, which I was totally cool with because WayForward rocks! He put me in contact with the amazing Matt at WayForward, who showed me the cuuutest pictures of a tough police woman rounding up fugitives! Aaaand that’s how I was blessed with the honor of voicing Patricia Wagon! Soooo much cooler than just auditioning and booking a role!

WF: How much of the game were you exposed to before your initial recording?

SK: Just a screenshot or two and character art. But it was AMAZING character art! Like actual sketches of all of Patty’s sides and action poses in that cool blue artist’s pencil!

WF: What was your approach to portraying the character?

SK: Officer Wagon’s character design is utterly adorable, so obviously I wanted to honor that with an equally cute voice. But she also has those super-cute angry eyes, so I wanted to be sure to give her an edge.

WF: How would you describe the character in general? Is there anything in particular about her you find likable or relatable?

SK: Y’know, she’s this aggressively pushy officer who is just doing her duty (ooo, kinda like how I got the job!), and really, who can blame her!?  But she does it all with such confidence, and it makes ya feel like there’s nothing she can’t do…which turns out to be exactly the case because as we see in MSF2, she straight-up switches professions (oooo, just like I did!). Patricia Wagon is my hero.

WF: Do you have a favorite line or catchphrase that she says?

SK: I kind of love “You’re SAFE!!” from MSF2! In the script, it specifically says “she saves babies by kicking them like footballs…strong emphasis on the KICK.” I just think the idea of punting the baby to safety is hilarious, and for this particular line, the direction is “screaming at and terrifying the baby!” I love it! And, obviously, “All Clear” is the best because it means you’ve passed the level!

SK: I recorded in my professional WhisperRoom home studio. You should see it! In addition to all the beautiful purple Auralex acoustic foam, I have Totoro stuffed animals shoved into the corners to keep it from sounding “boxy!” It’s really cute in there! I recorded each line multiple times for variety, and Matt was happy with what I sent, so it was all very easy! I didn’t do any ad-libbing because that writing was perfect and hilarious just as it was!

WF: What do you like about the Mighty Switch Force games? Have you conquered all of them?

SK: Honestly (and I really don’t think this is merely bias), I think the MSF games are some of the best side-scrolling platformer games out there (especially on the 3DS!). In the original 3DS versions, they flawlessly utilize the 3D game mechanic of swapping obstacles from the foreground to the background, and I LOVE that you can crush enemies (and Patty!) using this mechanic, as well! Brilliant! Alas, I have a Mac, so I haven’t been able to play Mighty Switch Force! Academy, but I’ve played the others, including the mobile Mighty Switch Force! Hose It Down!, which is right up my alley, as I love block-sliding puzzles! My favorite is still the original because… nostalgia!

WF: What are your thoughts on Mighty Switch Force! Collection coming out and finally having all these games available on the same hardware?

SK: Obviously, I think it’s floopin’ amazing, and please take my money! I’m wondering how it’ll all work because I’ve only played the 3DS versions (I don’t have a Wii U), but I can’t wait to try them out on the PS4 or Xbox One!

WF: We hear from a lot of people who are interested in being voice actors. Do you have any advice for them?

SK: First: acting, acting, acting. Take a lot of acting classes. Contrary to popular belief, it’s not about the voice (Although having those golden pipes definitely won’t hurt!) Second, find the community, it’s a supportive bunch. Third, not booking is very normal. It can be disheartening, but never let it get you down. And finally, infuse a part of yourself into everything you do, and just have fun!!

WF: Anything else you’d care to add?

SK: Thank you, WayForward, you guys are the BEST!!! The honor of voicing Patty has truly been a gift!