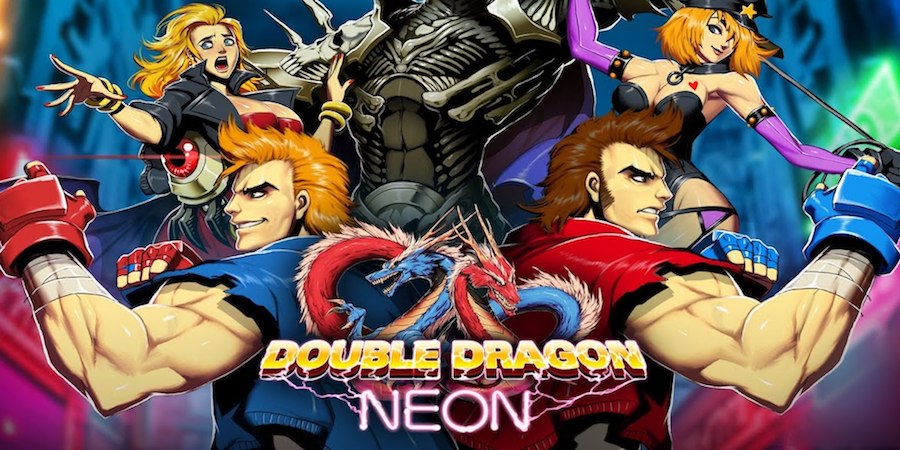 Double Dragon Neon, the cult-classic co-op beat-’em-up, is headed to Nintendo Switch courtesy of Majesco! On December 21, players will once again control totally radical martial artists Billy and Jimmy Lee on a weird, wild, side-scrolling brawler to rescue their friend Marian from the clutches of the villainous magical skeleton Skullmageddon — he’s bad to the bone.

Players will punch, kick, and High Five their way through goon-packed city streets, haunted forests, secret labs, and even Skullmageddon’s barely-hidden Space Dojo. Take down legions of expendable but enthusiastic bad guys, including the frequently palette-swapped and reskinned Williams, the whip-cracking Linda, and legendary heavyweight Abobo. Tip the odds in your favor by collecting skill-enhancing retro mix tapes and mastering the Gleam system, turning perfect evasions into powerful counter-attacks.

Built from the ground up for co-op play, the bravest of martial artists can go solo, but Double Dragon Neon is best with another hero on the couch. Don’t worry about your teammate ‘accidentally’ stealing all your power-ups either. Players can share health with a high five, or psych their partner out with a low five and steal some, if you’re feeling less than righteous.

Inspired by the Saturday morning cartoons of the late ’80s and early ’90s, Double Dragon Neon is the reinvention of one of the most iconic side-scrolling beat-’em-up series ever released. It’s been a long time coming since its original 2012 launch and 2014 Steam re-release, so get ready, grab a buddy (and a 2-liter soda), and party like it’s 1987 when Double Dragon Neon launches on Nintendo Switch on December 21, 2020 in North America with a European release to come in the weeks ahead. An announcement trailer can be seen here!

Features:
•An ’80s classic reimagined through the lens of neon nostalgia!
•Brawl through 10 stages solo or with a buddy in local co-op.
•Time your dodges perfectly for stylish “Gleam” counterattacks.
•What game has a dedicated High Five button? This one!
•The greatest skeletal villain this side of ’80s cartoons — Skullmageddon!
•All the bone-related puns you can stand! They’re very humerus!
•Punch all the things! Robots! A giant tank! Your own mutant clone!
•A toe-tapping, genre-hopping soundtrack by Jake ‘Virt’ Kaufman!