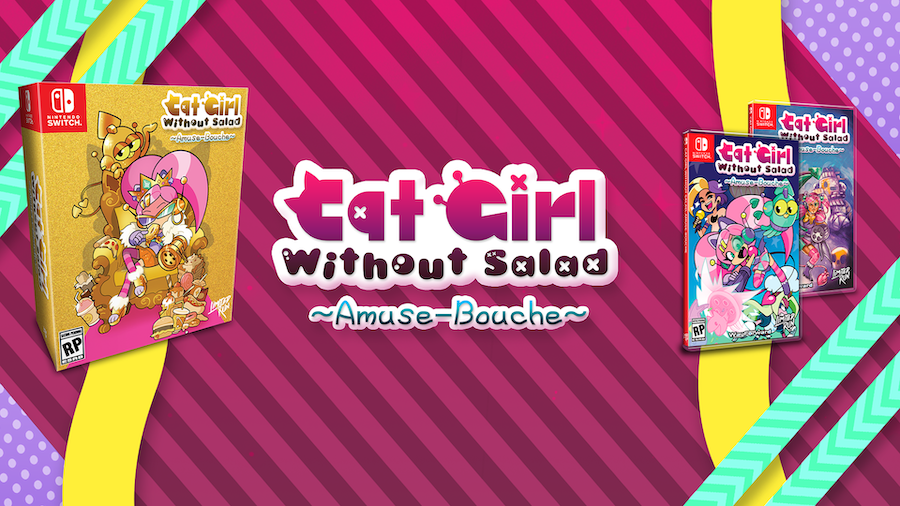 Celebrate April Fool’s Day with the game so absurd it shouldn’t exist…but does!

First, it was a ridiculous joke. Then, it was a ludicrous downloadable game. Now, the unthinkable has happened: Cat Girl Without Salad: Amuse-Bouche — the most astonishing, hyperbolic, genre-shattering, over-the-top video game ever created by human hands — is getting a logic-defying physical release courtesy of Limited Run Games! Available as an open preorder starting today, the funktasmical physical version of Cat Girl Without Salad: Amuse-Bouche for Switch can be preordered until May 1, 2022 on limitedrungames.com. Check out the trailer here!

But wait! There’s more! In addition to the standard edition of Cat Girl Without Salad: Amuse-Bouche (which includes the game and an alternative cover), a collector’s edition is also available, which includes the game itself, five astonishing alternative covers, a Squiddie plush, a CD soundtrack, stickers, temporary tattoos, space bucks (good luck finding anyone who will accept them as currency on Earth tho), a Space Bounty Hunter license, and an autograph card hand-signed by the game’s directors (with actual signatures, not some janky photocopy!), all packed into a collector’s box with blinged-out exclusive artwork — PLUS it comes with a bonus digital game code!

Heralded by the writer of this article as the Citizen Kane of video games, the physical version of Cat Girl Without Salad: Amuse-Bouche is sure to go down in history as a must-have collector’s item and one of the most unlikely gaming experiences ever conceived. The digital version of the game also remains available in the Nintendo Switch eShop. For more information, check out wayforward.com/catgirlwithoutsalad, and for news on other titles, please visit the rest of www.wayforward.com, and follow @wayforward on social media.