Behind the Music of River City Girls: An Interview with Megan McDuffee

November 21st, 2019 · Voldi-WF · Comments Off on Behind the Music of River City Girls: An Interview with Megan McDuffee 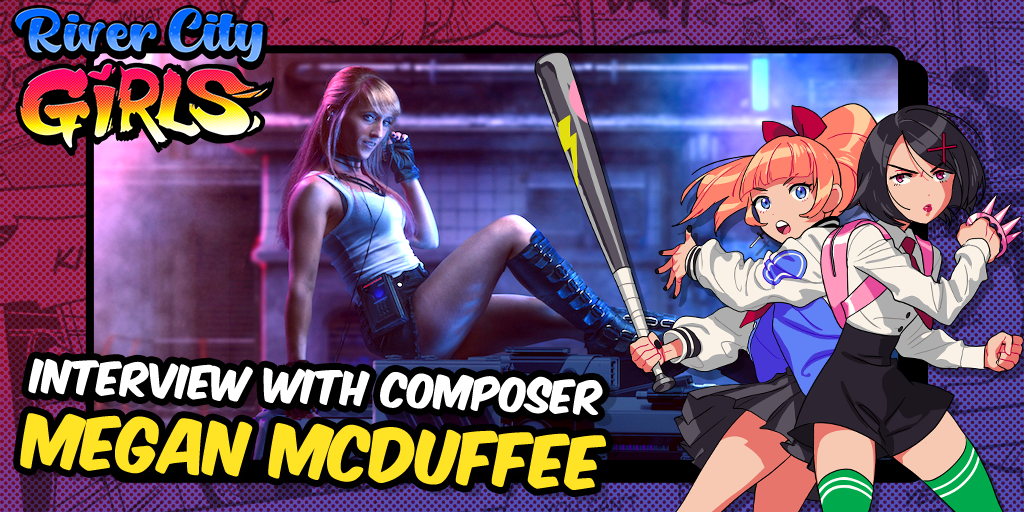 Players have been enjoying River City Girls since its launch in September for many reasons, among them the fast-paced action, the animation, the variety of moves, and its sense of humor — but one of the game’s most acclaimed features is its music. The soundtrack (available digitally at https://ffm.to/rivercitygirlsost) was a collaborative effort featuring artists such as NateWantsToBattle, Cristina Vee, Chipzel, and Dale North, but 50 of the 62 tracks in the game are by singer/composer Megan McDuffee, who created all of the game’s stage, shop, and menu tracks, including all of the vocal songs heard throughout the game (with the exception of the intro and ending).

A professional musician since 2012, Megan brought her unique, infectious synthpop performances to River City Girls to establish the game’s signature sound and create beat-’em-up beats that complement the combat. We recently had a chance to chat with Megan about what went into creating the River City Girls soundtrack, as well as her background, her inspirations, her taste in video games, and more. For more of Megan’s music, you can follow her on Twitter at @meganmcduffee, as well as on Instagram and her personal website. River City Girls is available now on Nintendo Switch, PlayStation 4, Xbox One, and PC.

WayForward: How did you get into music and end up pursuing it as a career?

Megan McDuffee: I’ve always just been into music, as far back as I can remember. It’s just one of those things that’s been with me the entire time I’ve been around. As a young kid I would play keyboards and sing, which eventually led me to private piano and voice lessons, musical theater, songwriter camps, choir competitions, and anything musical that I could be involved in. I knew I wanted to pursue a career in music as early as middle school, but the specifics didn’t take shape until I was an undergrad, when I fell in love with film scoring.

WF: What appeals to you about synthwave and synthpop in particular?

Megan: Growing up in the ’90s, a lot of the music and movies that were readily available came from the ’80s. We used to rent a lot of movies from our local library, and their selection was primarily from previous decades. Not sure why I was drawn to the synthesizer sound, but ’80s music and film soundtracks really stuck with me, Tangerine Dream and Trevor Jones helming my favorite scores, and Depeche Mode, Duran Duran, and Oingo Boingo being my favorite artists. Fast forward to about 2012, I was working for iTunes and a lot of music came across my path. I discovered that a lot of indie artists were drawing inspiration from that ’80s sound that I loved. Eventually it got the “synthwave” genre label as more musicians were creating it.

WF: Who are your musical inspirations or favorite performers?

Megan: I love so many artists, but if I had to choose a top few I’d have to say Sneaker Pimps/IAMX (I adore Chris Corner), Depeche Mode, Beck, Massive Attack, Younger Brother, and Infected Mushroom.

WF: Had you composed music for other games prior to River City Girls?

Megan: Yep! I’d scored a handful of indie titles, a few of which will be releasing in the near future.

WF: How familiar with the River City series were you before you began working on RCG?

Megan: Haha, not at all, really. I had heard of River City Ransom, but didn’t realize how deep the legacy went until I did some research towards the end of the project.

WF: For the unaware, you became involved with River City Girls through the recommendation of Dale North, who also contributed to the game’s soundtrack. How do you know Dale, and how did that lead to the RCG gig?

Megan: This is one of my networking miracles! Dale and I are both part of a video game cover/remixing/arranging community called the Materia Collective. Dale was also friends with the director of River City Girls, Adam Tierney. I guess at one point they were talking, and Adam asked Dale for recommendations of video game composers well-versed in a synthpop and synthwave style. Dale threw out a few names, one of which was mine. Dale and I had never met or even conversed with one another, yet I guess he had heard my stuff. You guys must have been impressed because here we are!

WF: How much of the game did you get to see when you started composing? What sorts of elements from the game inspired your music?

WF: What was the first track you composed for the game?

Megan: The very first track was a test track to see how well we worked together before they hired me for the full project. That track was “Unseen.” Thinking about Adam’s response once I had delivered it still makes me grin like a fool. (He was more than enthusiastic, haha.)

WF: Fifty tracks is a lot! Is it normal for you to create so many tracks for a single project? How long did it take?

Megan: It certainly is! Fifty is a personal record for me as far as music deliverables for one project. Overall I think I spent nine months on the music for River City Girls. I was completing a track or two per week.

WF: Out of all those tracks, do you have a favorite?

Megan: Oof, I’ve been asked this a few times. It’s so hard to narrow down a favorite, especially given the volume of music! For instrumental tracks, a couple favorites are “Payday” and “Azukay,” and a couple vocal favorites are “Bully” and “The Hunt.”

WF: How did you approach remixing the classic River City tunes?

Megan: I literally went phrase by phrase, transcribing chords and melodies by ear. Once I had everything written down or transcribed to a basic piano patch, I then loaded up some of my favorite plugins and synths that I’d used throughout the soundtrack and figured out how to synthpop-ify them. I took the main riffs and chords from each song to keep them somewhat recognizable, and then tweaked and added my own flavor to them.

WF: How does the style in River City Girls compare to your usual music style? Was there anything specific you had to keep in mind for this project?

Megan: My usual musical style is all over the map, having scored games, films, and film trailers. And up to this point I hadn’t released my own album as a vocalist/recording artist yet, but I had done a ton of collabs and co-writing. That said, it did feel like I was essentially hired to write my own album, as a lot of my personal style and influence came through in this score. I’m super lucky that WayForward hired me for me, and let me do my thing! The only thing I really had to keep in mind was to make sure that songs were generally upbeat and appropriate for a beat-’em-up. Normally I tend to go darker and moodier (which did end up seeping through on tracks like “Watch Your Back”).

WF: You essentially ended up being the singing voice of NOIZE throughout the game. Was that always part of the plan, and how did it feel to end up in that role?

Megan: When Adam was going through my work before hiring me, he found out that I’m also a vocalist. With that in mind, we discussed the possibility of having my vocal tracks be NOIZE’s songs throughout the game. I loved the idea, and it feels pretty dang cool to be like Danny Elfman was to Jack Skellington.

WF: What was it like experiencing the final product and hearing your music alongside the music of other artists?

Megan: Nothing will compare to seeing all the work I did over many months actually coalesce into a very polished, gorgeous final product. And since I only got to hear the other artist’s tracks shortly before release, it was a really awesome experience to finally hear and see everything.

WF: Have you always been into video games? What are some of your favorites?

Megan: I didn’t grow up with video games like some people. My first dabbling with games was in early middle school with the good ol’ grey brick Game Boy. But it wasn’t until my dad brought a Nintendo 64 home when I was about 13 that I realized how amazing games were. I still have a huge soft spot for the N64 because it was my first console. Some of my favorites include The Legend of Zelda: Ocarina of Time, Banjo-Kazooie, Super Mario 64, the Elder Scrolls IV: Oblivion, and Subnautica.

WF: We understand you’re a Kyoko person more than Misako. Why is that?

Megan: As soon as I saw the character design for Kyoko, I identified with her. And that fact was further cemented when I was scoring the manga segments of the game and was able to see her personality. We’re a lot alike. I even sound like her!

WF: Have you played all the way through River City Girls yet? If so, do you have any favorite scenes? Do you feel bad beating up NOIZE?

Megan: I haven’t played through yet (but don’t worry, I’m planning on it). Hard to pick favorites; I really just love all the character interaction and dialogue as a whole. And yes, yes I do. I wish NOIZE and Kyoko could rekindle their friendship.

WF: What do you think of the player response to the game’s soundtrack so far?

Megan: Oh man, as I was working on the soundtrack I felt really good about it, and of course hoped that people would like it. But I wasn’t prepared for just how positive the response has been. It’s overwhelming, and I’m extremely touched that so many people are loving my work.

WF: If people want to hear more of your work, where would they find it?

Megan: Everywhere! (Ok, maybe not outer space.) My websiteis a good spot for my overall body of work, and also I have most of my stuff, collaborations and features with other producers included, on Spotify. Furthermore, I’m releasing a dark synthpop cover song EP on December 13 that is very similar in style to my NOIZE tracks, so keep your eyes and ears open for that!