May 3rd, 2021 · Voldi-WF · Comments Off on A Shantae Series Retrospective 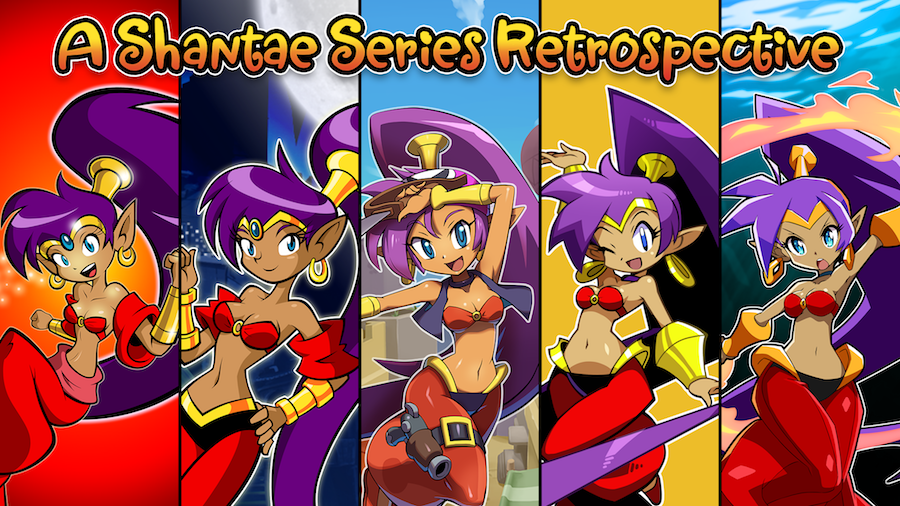 Celebrate the entire series’ arrival on Switch with a look back at all five Shantae games!

Half genie, half human, all hero — Shantae has been dancing, transforming, and hair-whipping her way to glory for the better part of two decades! Though originally conceived of as a character by Erin Bozon in the mid 1990s, it wasn’t until 2002 when the fiery protector of Scuttle Town came to life in her first gaming adventure, courtesy of publisher Capcom and a team of developers at WayForward that included Erin as creator and animator, her husband Matt as the game’s director, and Jimmy Huey as lead programmer. Since then, Shantae has gone on to star in five full games, crossed over with some of the biggest names in the industry, found herself on magazine covers, and been represented in physical form with plushies and figurines.

With the recent release of the original Shantae on Switch, all five Shantae games are available on a single game system for the first time ever (see the video here), allowing players to experience Shantae’s saga thus far in its entirety, either at home or on the go. If you haven’t played all five titles yet, here’s what you have to look forward to. This is where it all began! In her inaugural adventure, Shantae crosses paths with the nefarious lady pirate, Risky Boots, who attacks Shantae’s home of Scuttle Town and makes off with the mysterious technology known as a “steam engine.” To complete her scheme, however, Risky must obtain four powerful elemental stones, so Shantae sets out across Sequin Land to get them first.

Along the way, she receives aid from her friends Bolo and Sky, meets a troublemaking zombie named Rottytops for the first time, visits numerous towns and labyrinths, and dances to transform into four creatures with distinct abilities. Though released for Game Boy Color, the game had additional features when inserted into a Game Boy Advance – specifically a bonus transformation and an altered color palette. In the new Switch version of the game, you can choose whether you want to play in GBC or GBA mode. Despite receiving critical acclaim, the original Shantae was considered to be a hidden gem due to its late release in the Game Boy Color’s lifecycle, so it wasn’t until the advent of downloadable DSiWare on the Nintendo DSi that WayForward was able to create and publish the sequel. Shantae: Risky’s Revenge took the concepts of its predecessor and elevated them to the next level with more detailed graphics, multilayered environments, and smoother gameplay, while retaining aspects such as hair-whipping action, creature transformations, and nonlinear exploration.

As the title suggests, Risky Boots was back with an evil new plot, and Shantae once again set out to stop her, which required her to face the three Barons of Sequin Land: Squid Baron, Ammo Baron, and Hypno Baron. Fortunately, her allies – Uncle Mimic, Sky, Bolo, and even Rottytops – were back to lend a hand. A few years after the game’s initial release, the Director’s Cut launched, featuring an improved map and fast-travel system, as well as an unlockable Magic Mode for extra challenge. In this fan-favorite entry in the series, Shantae found herself teaming up with an unexpected ally — none other than her nemesis, Risky Boots! As the unwitting partners attempt to stop Sequin Land from falling to a sinister curse, Shantae sets sail on a swashbuckling adventure that takes her to a variety of exotic locales — from tropical Saliva Island to frigid Frostbite Island to the haunting Village of Lost Souls — each with their own enemies and hazards.

As she explores trap-filled labyrinths, Shantae acquires pirate gear – a Flintlock Pistol, Pirate Hat, Scimitar, Risky’s Boots, and even a Cannon – that give her new powers such as dashing, gliding, and quadruple-jumping. Of course, the adventure wouldn’t be complete without ridiculous characters and situations, which include a stealthy escape sequence, a Rottytops rescue gauntlet, and the return of a particularly rascally foe! The game first launched on Nintendo 3DS (featuring stereoscopic 3D visuals) and has since appeared on several other platforms including Nintendo Switch, Xbox One, PlayStation 4, and PC. While Shantae: Half-Genie Hero was the fourth Shantae game, it was a game of many firsts: the first series entry with HD graphics, the first developed specifically for home consoles in addition to handheld systems, the first to feature a chapter-based structure instead of a nonlinear map, and the first (and only!) WayForward game to be crowdfunded.

This time out, Shantae ventured forth to collect the parts necessary to build Uncle Mimic’s Dynamo – a machine that would help defend Scuttle Town from evil – while simultaneously stopping a number of villainous plots perpetrated by foes like Ammo Baron, Techno Baron, and, of course, Risky Boots. An increased number of transformations provided Shantae with more abilities than ever before, and numerous secrets and hidden items gave players good reason to return to previous areas to put those abilities to good use.

In addition to the main game, several DLC modes were introduced, offering new play mechanics and modified levels. These included Pirate Queen’s Quest (play as Risky Boots!), Friends to the End (play as Rottytops, Bolo, and Sky!), and the Costume Pack (gain unique abilities as a ninja, a sunbather, and a mighty police officer!). There was even a free update that added Jammies Mode (play as Shantae in her PJs and attack with pillows!) and a crossover transformation with the Blaster Master series! The Ultimate Edition of the game was later released, including all the DLC modes and extra content in one convenient package. Most recently, Shantae and the Seven Sirens arrived on the scene, initially as a special version on Apple Arcade that let fans play the first half of the adventure, and then, in May 2020, in its full form on consoles, PC, and Apple Arcade. While featuring a brand-new story, new transformations, a new setting (mysterious Paradise Island), many new characters, and new features such as a collectible card system that let players customize Shantae with various abilities, it was also a “greatest hits” of sorts that combined the most popular features of previous Shantae games.

These included a single interconnected map (as seen in the original Shantae and Shantae: Risky’s Revenge), instant transformation abilities (similar to the Pirate Gear in Shantae and the Pirate’s Curse), HD graphics (not unlike Shantae: Half-Genie Hero), multiple towns and labyrinths, and even a new dancing minigame (which hadn’t been featured since the very first Shantae). The game also offered a spectacular anime-style opening from the folks at Studio TRIGGER, as well as additional animated cutscenes sprinkled throughout the journey.

What’s next for everybody’s favorite Half-Genie? That remains to be seen, but for now, these five adventures should keep you enchanted for hours on end.