A Monster of a Story 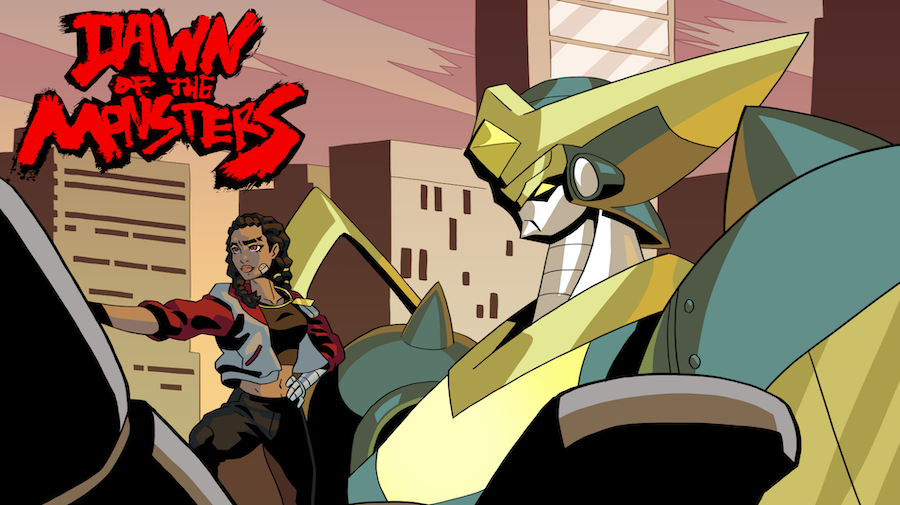 This is Unai Cabezón, narrative director and writer for Dawn of the Monsters, a kaiju beat-’em-up developed by 13AM Games and published by WayForward (out now on pretty much every platform under the sun, including Switch, PlayStation 4 & 5, Xbox, Steam, and Stadia)!

Dawn of the Monsters is a brawler where you play as one (or two, in co-op mode) of four colossal warriors — the mecha Tempest Galahad, giant superhero Aegis Prime, and the two monsters Megadon and Ganira — and fight against the Nephilim, titanic creatures that have invaded Earth. On top of complex combat and customization systems, a 35-plus-mission-long campaign, and many, many references to the kaiju genre, the game features a deep and fully-voiced story (which you can see a trailer for here).

“Wait, story? In my kaiju beat-’em-up!?” is a perfectly valid reaction. Beat-’em-ups usually have little story beyond whatever’s necessary to justify going around punching goons. And many kaiju movie fans watch these movies to see giant monsters spectacularly smashing each other, not caring too much about the plot and what’s going on with the puny humans.

However, our favorite kaiju stories, ranging from the classic-est 1954 Godzilla to those as recent as Shin Godzilla or Colossal, are more than monsters and destruction. We wanted to make sure that our video game-shaped love letter to the genre captured the themes and deeper meaning that we see in those stories. Additionally, we think that a good story can enhance the experience of a video game and make it more memorable and immersive, regardless of the game’s genre, the same way a nice soundtrack or pleasing visuals can do.

With all of that in mind, we set out to create a narrative that would appeal both to those who just wanted their dose of destructive kaiju action and those who would also enjoy deeper characterization and lore. In order to accomplish that, we designed a story-on-demand system that lets each player choose how much of the narrative they want to experience and at what pace.

The main dialogue and cutscenes show up for all players as they progress through the campaign, as does some dialogue during the levels themselves. We wanted to encourage all players to experience this part of the story, the fun action stuff, the Pacific Rim side of things. But players who choose to can also access the optional Chats and Archives menus, where they can find additional dialogue depending on their progress in the campaign, and files with more information and illustrations about the game’s world. Going through all of it gives the game a more measured and thoughtful pace, reminiscent of stories like the Patlabor movies.

This way, as a player, you have agency over the narrative experience you receive. You want to experience just the core story? You’re here for beatin’ ’em up and would just skip cutscenes and dialogue? You’d rather stop after every mission not to miss out on any chats and to carefully read every single archive file? Or something in-between, checking every now and then if there’s something interesting over in Chats or Archives? Your call.

Additionally, we made sure not to overload players with story too early in the game. The action is first in Dawn of the Monsters, and we wanted that to be clear. However, once you’re a few missions in, you’ll realize that there’s more to it than you thought and — hopefully — you’ll find yourself unexpectedly hooked, and ready to dive in to the characters and lore. I mentioned Pacific Rim and Patlabor, which certainly influenced the story in Dawn of the Monsters. But those are only two of the many, many works that we looked at. Some other big influences include the classic Godzilla films, the Gamera trilogy, the Showa-era Ultraman series (Ultraman Gaia in particular), and the Neon Genesis Evangelion anime. For the game’s narrative — same as for its visuals, designs, music, and sounds — we did extensive research on the whole tokusatsu genre, watched a ton of movies, and worked with incredibly passionate developers who know absolutely everything about it. Any piece of kaiju media you think of when seeing the tropes or references in the game — you name it, it’s probably an inspiration for Dawn of the Monsters.

However, this is a story that looks at sources beyond the kaiju and tokusatsu films. There are multiple other media and genres we looked at to make Dawn not just a colossal homage, but also a story of its own, a story that felt ours. And same as in the art department, comic books were a big part of that. We’ve got dialogues that aim to concisely provide character development the way Saga does. In-universe archive files that drink directly from Watchmen (or the more recent Dawn of X line). Creatures of dark and mysterious origins like those in Hellboy. A mid-apocalyptic world that often peeks at how Akira managed to pull off its own. Even a TV-style intro inspired not just by the one in Pacific Rim but also by the segments in The Dark Knight Returns (which replaced a previous intro that mimicked the description of the Gun Devil’s first appearance from Chainsaw Man, but ended up being cut). It didn’t matter how many references the game had or how well-integrated the narrative was into the action, though, if we didn’t have a solid cast of characters to drive the plot. To avoid some of the pitfalls in some of our least-favorite kaiju movies, we wanted our characters to be proactive and lead the pace of the story, to be directly related to the action and the kaiju. Considering our resources, we were also aware that we couldn’t afford to have a large cast. So we ended up with eight characters, each one with a very specific role both in the game and the story.

The cast is comprised by our protagonists Jamila Senai and Eiji Murasame, who are also playable characters in the form of the mecha Tempest Galahad and the giant superhero Aegis Prime; Claire Lione, their boss and the voice of the game’s instructions for the players; Doctors Ivakin and Cruces, managers of the Augments and Archives menus, as well as providers of some exposition and light-heartedness; Commander Fosco, a slimy bureaucrat who, well, we didn’t want players to like; and Kiwa and Kohara… talking about them would lead to spoilers, so let’s not.

The characters soon all had personalities and voices of their own, and writing their dialogue was really fun. I found Jamila the most interesting character to develop, whereas Eiji and Fosco practically wrote themselves. I really loved writing Dr. Cruces’s nerdy lines, and Dr. Ivakin has been a favorite of the team’s from day one. Claire, however, was the most challenging character to write! As the game’s voice, the person who tells both the other characters and the players what to do, she has as many lines as each of Eiji and Jamila, but most of it had to be extremely clear and concise. So it was quite difficult to find spots where we could give her some room to breathe, get some development, and try to entice players to like her. In any case, writing the Chats dialogue was particularly fun, with many of them being little “what happens if I put these two characters in a room” experiments.

To cap it off, we managed to get hold of some amazing voice acting talent to interpret our characters. Each of them adds so much personality and charisma to their characters, and they immensely increase the narrative’s value. It’s been our team’s first experience getting a game fully voice-acted, and it’s certainly one we’d love to repeat.

The end result is a fully-voiced story, both action-packed and deep in characters and lore, where each player can experience at their own pace while stomping around the Nephilim-infested cities. Based on fan and review reactions so far, we believe we’ve accomplished crafting a successful tale, not at all what one expects from a kaiju brawler, but a memorable one that will leave you wanting more.

Dawn of the Monsters is out now digitally, and available to preorder physically on Switch, PS4, and PS5 until April 3 at limitedrungames.com.