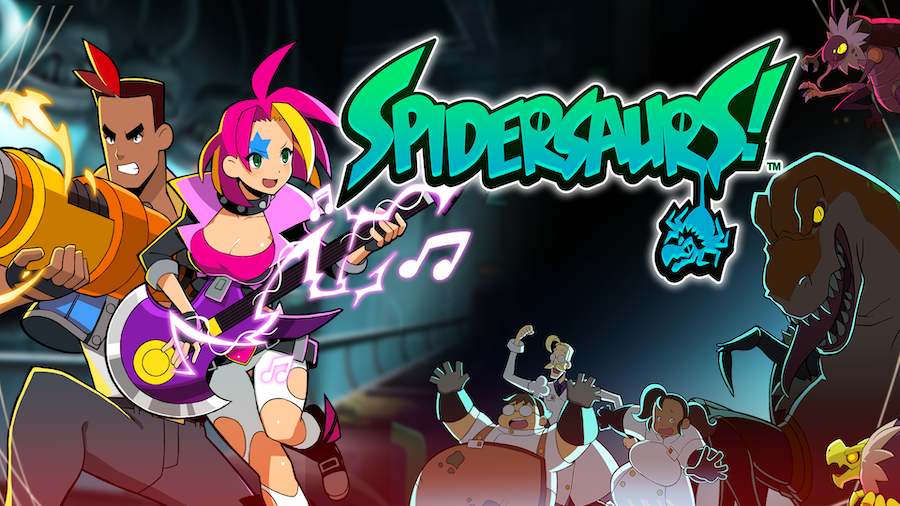 Sink your teeth into this Saturday-morning-cartoon-inspired run-‘n’-gun shooter at Limitedrungames.com!

The dreaded Spidersaurs are busting loose from their digital confines and preparing to invade your homes! We are delighted to announce that the physical edition of 2D run-‘n’-gun shooter Spidersaurs is now available to preorder on Nintendo Switch, PlayStation 4, and PlayStation 5 from Limited Run Games until February 5, 2023, offering nonstop blast-’em-up gameplay, two-player local co-op, and countless mutant monstrosities to eradicate. A new trailer showcasing the physical edition, as well as the game’s over-the-top action, can be seen here!

Released digitally on consoles and PC in 2022, Spidersaurs is an explosive, Saturday-morning-cartoon-inspired action game from the developers of Contra 4 that sends one or two players into intense, side-scrolling mayhem against a terrifying man-munching menace. Though originally created by InGest Corp as a new food source for humanity, the genetically engineered dino-spider hybrids known as Spidersaurs have gone on a rampage, causing punk rocker Victoria and officer-in-training Adrian to be called into battle.

Utilizing Spidersaur ability upgrades and 12 awesome weapons like Victoria’s Laser Show and Adrian’s Football Rocket, you must run, jump, climb, and shoot your way through more than six stages of chaos and put a stop to the relentless army of vicious (but delicious) eight-legged freaks. Multiple difficulty settings, unlockable arcade and speedrun modes, a fully animated intro by Powerhouse Animation (Castlevania, Masters of the Universe: Revelation), and an epic theme song by Cristina “Vee” Valenzuela, Jason Charles Miller, and RichaadEB round out the package.

The standard physical edition of Spidersaurs is priced at $34.99 and is available on Nintendo Switch, PlayStation 4, and PlayStation 5 through Limitedrungames.com. Additionally, a jam-packed collector’s edition priced at $64.99 is available for all three platforms, which includes the game itself, a soundtrack CD by legendary Japanese composer Harumi Fujita (Strider, Rescue Rangers), a double-sided 18″ x 24″ poster (featuring Victoria’s concert promo image and a retro-inspired map with tips), an InGest parking sticker, a Victoria concert ticket, a Pizzextinction coupon (not valid), and a Spidersaurs cookbook, all inside a 16-bit-style box. Both the standard edition and collector’s edition are being offered as open preorders.

Described as “a love letter to run-‘n’-gun classics” by Real Otaku Gamer and called “a beautiful homage to a bygone era” by Pure Nintendo, Spidersaurs is also currently available as a digital download on Switch, PS4, PS5, Xbox, and PC via Steam. For more info on Spidersaurs, as well as news on other WayForward titles, please visit the rest of wayforward.com and follow @wayforward on Twitter and Facebook.