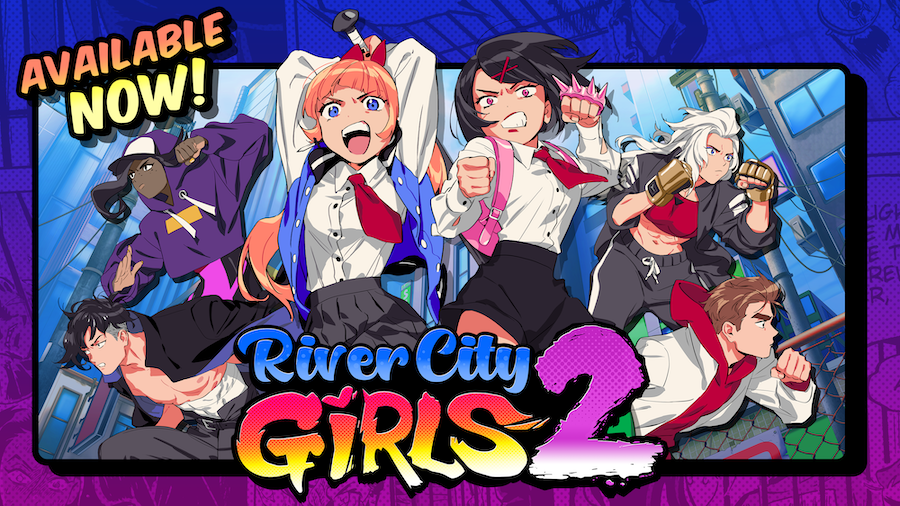 Return to the mean streets of River City in this epic beat-’em-up sequel!

It’s time to hit the streets, punch out some punks, and fight back against a criminal empire — River City Girls 2 is here! We are excited to announce that the hotly anticipated beat-’em-up sequel is now available digitally in North America and Europe on Nintendo Switch, PlayStation 4, PlayStation 5, Xbox One, Xbox Series X|S, and PC via Steam. Featuring six playable characters, gorgeous pixel-art graphics, 2-player online with crossplay, and 4-player local co-op, this official entry in the legendary River City/Kunio-kun series is priced at $39.99 and carries an ESRB rating of E10+. A new launch trailer highlighting the game’s features can be seen here!

Building upon the story and gameplay of the first River City Girls, River City Girls 2 delvers even more of what you loved about the original: more characters, more weapons, deeper combat, new enemies to fight, RPG-like character growth, and a bigger world with multiple routes. Joining the returning playable cast of Misako, Kyoko, Kunio, and Riki are steel-abbed warrior Marian (from the Double Dragon series) and breakdancing brawler Provie (from River City Ransom: Underground), who set forth on a sprawling adventure that takes them across the deadly streets and dark alleyways of River City. Armed with new bone-busting techniques — including chaotic Lift-Off attacks, defense-shattering Guard Breaks, and elemental status ailments — the heroes are fired up and ready to take on crime lord Sabu and his army of underworld thugs.

As you fight through environments such as a nightclub, an amusement park, and a tech-industry campus, you’ll master an arsenal of moves, conquer loads of sidequests, power up with items and accessories from more than 40 shops, and enlist assistance from recruited enemies and hired heavies. Countless destructible objects, a vast number of secrets, and a day/night cycle help bring River City to life, while dynamic motion-comic cutscenes, thousands of lines of character-specific voiceovers (in both English and Japanese), and a mesmerizing soundtrack from critically acclaimed River City Girls series composer Megan McDuffee complement the action. The OST is currently available for digital download here!

In addition to the digital version of River City Girls 2, a physical edition from Limited Run Games, which was available to order earlier this year, will be shipping in the months ahead. For more information on River City Girls 2, please follow @WayForward on Twitter and Facebook, or discord.gg/wayforward on Discord, and check out the official site!

Key Features:
•Six playable characters, each with their own fighting styles and upgradable move sets!
•Enhanced combat: Guard Breaks, Lift-Off combos, and more!
•River City is bigger than ever! New locations with multiple routes and secret areas!
•Play solo or team up with a friend, locally or online
•New hired henchmen aid players in battle! Hold two recruits at once!
•Loads of NPCs to meet, interact with, and punch in the face – including surprise cameos!
•Awesome anime intro, comic book cutscenes, English and Japanese voiceovers, and a spectacular soundtrack featuring RCG1 composer Megan McDuffee!